Learn to appreciate the little things in life, take note of what's around you and do so with this sleek personalised Parker Jotter pen. This iconic pen steeped in 60 years of Parker history. This streamlined design is the latest in a long line of Parker Jotter pens. This engraved pen by Parker features a stainless steel barrel and cap with high-shine trims and signature Parker arrowhead clip. The stunning Parker Jotter is the perfect gift for graduates, professionals and anyone who appreciates fine stationery. 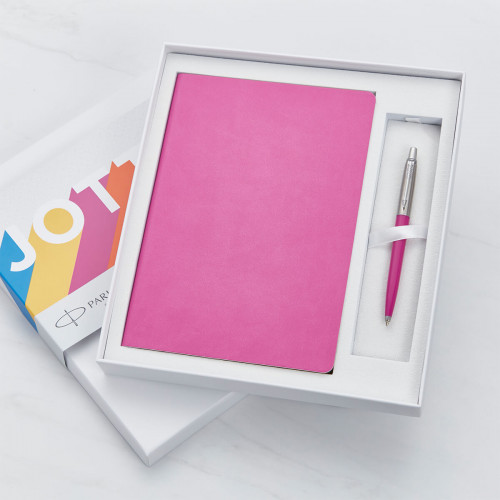 This Parker gift box includes an exclusive design magenta Parker A5 notebook and Parker Jotter ball pen. The notebook has 96 lined sheets on cream paper, and ribbon marker. The pen can be personalised with an engraved name, choose the font from the dropdown menu above, then press 'personalise this gift'.

The Gold Trim IM Parker ballpoint pen features a durable stainless steel nib and gold finishes. This personalised pen comes presented in a stylish gift box. Choose the font from the dropdown menu above, then press 'personalise this gift'.Pen comes with blue ink. 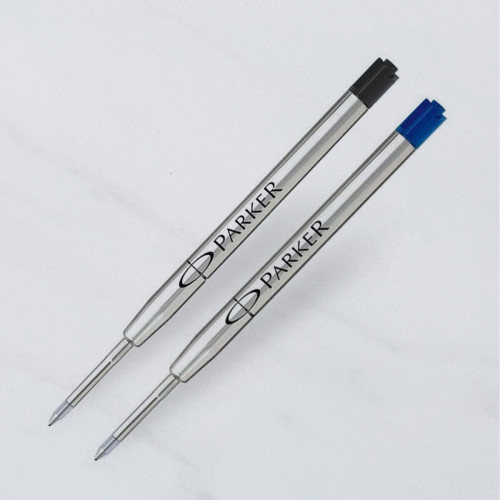 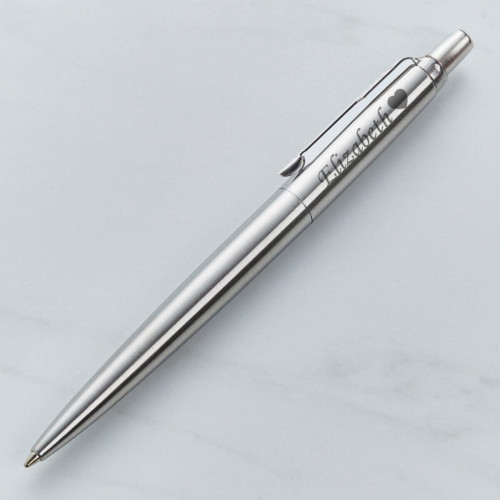 Parker is a world renowned stationary brand. We have carefully hand picked a selection of luxury engraved Parker pens and Parker gift sets, all available from our Nottinghamshire based workshop. Parker products make up a large part of our in-house stock of luxury pens. Each of our Parker products are available with and without personalisation.

Most of us use pens on a daily basis, whether it's making notes in a meeting, lecture or leaving reminders around the house. If you aren’t sure what gift to get for your loved ones, a pen may be the perfect choice. It’s a gift they won’t be expecting but one they will cherish and appreciate as its functional as well as thoughtful.

Our most popular Parker product is the handy Parker Jotter ballpoint pen. This stainless steel pen is lightweight and has a modern streamlined design making it perfect for everyday use. Our Parker jotter is also available with a gold trim. If you have some friends and family with colourful personalities they might appreciate a writing instrument to match with our colourful Parker Jotters available in pink, blue, orange and yellow. Each of our engraved ballpoint pens comes with 1 ink refill included and we stock additional refills in both black and blue.

If you are looking for a sophisticated gift, a Parker fountain pen is great for someone who appreciates the scratching of a traditional fountain pen. We have hand picked a beautiful example from Parker's IM range. The IM collection features timeless designs with gold accents, perfect for leaving a long lasting impression. Our Parker IM fountain pen is available in a silver metal finish and a black finish each presented in a stylish Parker gift box.

Give a little bit extra with a notebook and personalised pen gift set. Parker has a range of high quality notebooks to perfectly accompany their premium pens. We are certain there will be a gift set your loved one will love. If your loved one is always on the go our Parker notebook and jotter pen gift set could be just what they are looking for. An A6 notebook and lightweight stainless steel jotter pen are the perfect combination for using during travels around and making quick notes on the go. If you’re doing a staff secret santa you could brighten up the office without budget friendly colourful notebook and pen gift sets available in yellow, pink and orange.

A History of Parker

With over 130 years of history Parker is one of the most well established and globally recognisable pen brands. Dating back to 1888 when George Stafford Parker applied for his first pen patent. The Parker story started with the driving philosophy of ‘It will always be possible to make a better pen’. His second patent came in 1894 with the invention of an anti-leak system the ‘lucky curve’  George Stafford Parker’s determination for innovation propelled his business and over the next few decades it grew from strength to strength. In 1918 Parker surpassed the $1 million mark for the first time.

Their innovation continued with the release of multiple new pens, Duofold, a large bold premium priced pen released in 1921. In 1933 the Vacumatic pen was developed and is the first pen to feature the infamous Parker arrow clip designed by Joseph Platt. To mark 51 years in business in 1939 Parker released the Parker 51 pen which was inspired by Kenneth Parker's passion for aircraft, this won an Academy Award for Best Design and is considered one of the best pens of the 20th Century. In 1957 the Parker arrowhead originally designed in 1933 became the brand’s emblem and was evolved again in 2015 to match the brand's modern standards of sophistication and luxury. 5 years later in 1962 Parker was awarded the Royal Warrant by Queen Elizabeth II, making them the official supplier of writing instruments to the Royal Households.

Since then Parker has continued to develop their pens, developing new collections and designs inspired by the modern world. With the same passion and determination instilled by their founder George Stafford Parker.